Every week the BLS reports these numbers and IAVA’s research team tracks them for you, but that doesn’t mean much if you don’t know where these numbers come from. To understand the unemployment numbers, you should first have an understanding of who the BLS is talking about when referring to the unemployed.

There are three categories individuals can fall into – unemployed, employed, or not in the labor force. BLS considers individuals to be employed if they worked at all for pay during a certain week each month. This also includes people who are on vacation or other leave from their jobs, including family leave. 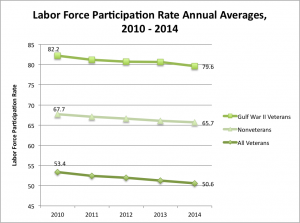 As shown in the above figure, post-9/11 veterans have a higher labor force participation rate compared to those of all veterans overall and nonveterans. Post-9/11 veterans also have consistently higher rates of unemployment – meaning more are consistently looking for work and able to work. As more new veterans return from the most recent conflicts, we should keep in mind their military experience, specialized skills and willingness to work. As a nation, we need both private industry and the public sector to provide opportunities for all veterans seeking not just work, but long-term career success.