This was a big week as IAVA Founder and Chief Executive Officer Paul Rieckhoff and Chief Policy Officer Melissa Bryant held a joint press conference in order to announce the Burn Pits Accountability Act (H.R. 5671) alongside Reps. Tulsi Gabbard (D-HI) and Brian Mast (R-FL). IAVA is happy to report that the bill has already picked up additional cosponsors in Reps. James Comer (R-KY), Peter Welch (D-VT), Walter Jones (R-NC) and Madeleine Bordallo (D-GU) as well as being supported by 24 other veterans organizations. Tell your House Member to cosponsor and support passage of this historic bill here!

Additionally, The Military Coalition, of which IAVA is an active member organization and committee co-chair, has added language surrounding toxic exposure to their Statement for the Record for the Senate Armed Services Subcommittee on Personnel. These are all HUGE wins for #BurnPits and will continue to drive momentum for this important issue! 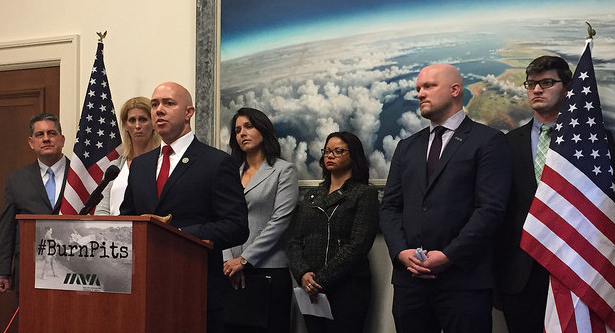 In other Big Six news, the #SheWhoBorneTheBattle campaign is continuing to go strong as the Deborah Sampson Act (S. 681/H.R. 2452) picks up an additional cosponsor in the House, Rep. Diana DeGette (D-CO)! The VA Medicinal Cannabis Research Act (H.R. 5520) has also picked up additional cosponsors this week, Reps. Mike Quigley (D-IL) and Salud Carbajal (D-CA), after getting passed out of committee last week. Furthermore, the IAVA supported VA MISSION Act (H.R. 5674) to reform VA health programs passed out of the House this week with overwhelming support (347-70).

IAVA Legislative Director, Tom Porter, recently met with the offices of House Majority Leader Kevin McCarthy (R-CA) and Majority Whip Steve Scalise (R-LA) to voice strong opposition to efforts to roll back student protections and laws that protect the Post-9/11 GI Bill from abuse in a sweeping legislation to update higher education laws. We will stay on this!

IAVA Members have been critical in spreading the word on these issues, and have sent over 1,800 messages to their Members of Congress this week regarding IAVA’s Big Six priorities. In order to help spread the word to your Members of Congress, be sure to visit IAVA’s “Take Action” page here.