It was an exciting week for the Government Affairs team in D.C. While tensions may be high on Capitol Hill, that has not slowed the team as we continue to push our #BigSix priorities. We celebrated a huge milestone for our #SheWhoBorneTheBattle campaign, participated in a toxic exposures meeting, and attended a VSO survey release.

On Monday, IAVA VP Tom Porter and EVP Lindsay Rodman joined with a coalition of VSOs and Congressional staff to meet with comedian Jon Stewart and John Feal of the Fealgood Foundation to discuss the health impacts that the military and veteran community face as a result of exposure to burn pits during their deployments. IAVA previously worked with both Stewart and Feal to get health benefits for 9/11 First Responders impacted by illnesses resulting from their exposures at the World Trade Center site. After landmark legislation passed earlier this year to permanently fund the 9/11 Victim Compensation Fund, which Stewart championed, he committed to taking on Burn Pits as his next major issue. Proud to have them join us in advocating for those impacted!

This week we celebrated a huge milestone for our #SheWhoBorneTheBattle campaign. The Deborah Sampson Act (H.R. 3224/ S.514), with updated provisions to prevent assault and sexual harassment at VA facilities, passed out of the House Veterans Affairs Committee (HVAC). IAVA has been the lead champion for the original Deborah Sampson Act since the last Congress when we developed the bill with the Senate Veterans Committee, and we are proud to see that it is carrying forward. We are looking forward to seeing this necessary piece of legislation for women veterans brought to the House floor. 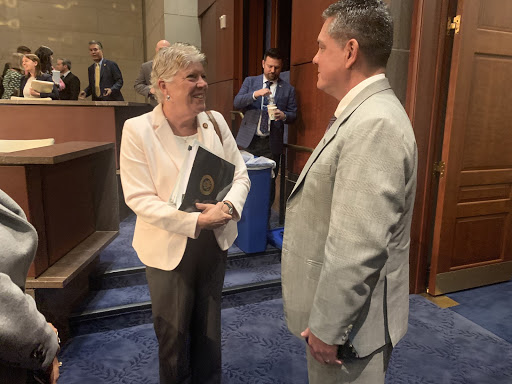 Our Government Affairs Associates, Ryan Britch and Kaitlynne Hetrick, attended the release of the Wounded Warrior Project 2019 Annual Survey at the Brookings Institute. The research showed promising trends in veteran education and employment. However, continuing and worsening trends in depression and mental health issues are startling.

On Thursday, Kaitlynne attended a meeting of The Military Coalition Healthcare Committee. A special presentation about FeNO testing was given by retired Vice Adm. Norb Ryan and Maureen Elias, an assistant director at Vietnam Veterans of America. This testing measures the amount of nitric oxide that is in an exhaled breath, which is one of the main indicators for people with allergic asthma. FeNO testing can help aid doctors in creating a treatment plan for patients with asthma, and potentially cut costs as the use of this test is relatively inexpensive. There are many veterans and active-duty servicemembers that come back from deployments with respiratory issues and FeNO testing has the potential to begin the process of diagnosis.