As Congress and IAVA get ready to take a break for Thanksgiving, we have been settling into our new D.C. office and working to gain support on our #Big6. This week we received some interesting information about toxic exposures in the Middle East, submitted testimony to the House Veterans Affairs Committee (HVAC), and presented Sen. Johnny Isakson (R-GA) with an award before he ends his time on Capitol Hill.

On Monday, Government Affairs Associate Ryan Britch attended the bi-weekly Toxic Exposure in the American Military (TEAM) meeting hosted by Wounded Warrior Project. These meetings are crucial to our #BurnPits campaign and create a roundtable discussion for IAVA and other Veteran Service Organizations (VSOs) focused on creating a solution to the medical difficulties that many servicemembers are facing due to toxic exposures. The Center for a New American Security (CNAS) presented information on the Periodic Occupational & Environmental Monitoring Summary (POEMS). This is a DoD system that measures toxic particulate matter from large sites in Iraq, Afghanistan, and the Horn of Africa. This data is visualized on a variety of maps and documents. This database has great information on cancer-causing particles at large military bases in the Middle East. This can be a powerful tool used by VA to support a veteran’s claim that they have been exposed to burn pits.

On Wednesday, Director of Government Affairs Travis Horr submitted testimony for an HVAC hearing on new suicide prevention measures. Legislation under consideration would create a new grants program and allow VA to reach veterans not currently in the VA system that may be at risk of suicide. VA Secretary Robert Wilkie testified on the legislation and is largely supportive of these programs. IAVA looks forward to continuing to work with the Committee and all of our VSO partners in order to better serve these at-risk veterans and their families. 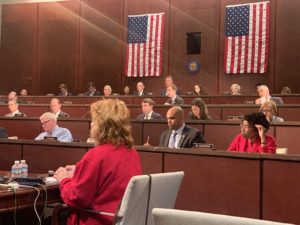 HVAC during the hearing on Rep. Bergman’s Improve Act and a draft bill submitted by Chairman Takano

The Military Coalition Health Care Committee (TMC HCC) held it’s monthly meeting on Thursday this week. Government Affairs Associate, Kaitlynne Hetrick, attended the final committee meeting of 2019 and the focus was mainly on the legislative goals for 2020. The committee also voted on a new committee co-chair, electing Judy Rensberger of Commissioned Officers Association of the USPHS. The Health Care Committee, as well the entire TMC, is a great way to band together to support legislation that helps our active-duty troops, veterans, and their families.

Senator Johnny Isakson (R-GA), Chairman of the Senate Veterans Affairs Committee, will be retiring at the end of the year after serving 20 years on Capitol Hill. Chairman Isakson has been a champion of many of IAVA’s priorities over the years, including the Clay Hunt Suicide Prevention for American Veterans (SAV) Act. On Thursday, IAVA CEO Jeremy Butler, Travis Horr, and Ryan Britch presented Chairman Isakson with IAVA’s Lifetime Achievement Award to honor him for his commitment to helping veterans during his time in Congress. “I appreciate Iraq and Afghanistan Veterans of America for honoring me with the Lifetime Achievement Award for my work on behalf of our nation’s veterans as chairman of the Senate Committee on Veterans’ Affairs,” said Senator Isakson. “Our veterans have earned the best we can give, and it’s important that we deliver on our promises.” We are so grateful for his dedication to veterans during his tenure in congress. The full press release can be read here. 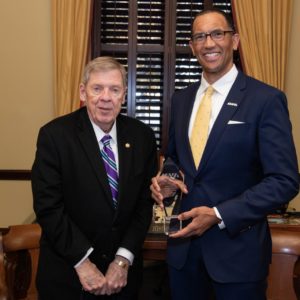 We added 13 new cosponsors for IAVA supported legislation, including more cosponsors for our #SheWhoBorneTheBattle campaign in both the House and the Senate.

Thank you to Reps. Tony Cardenas (D-CA), Katie Porter (D-CA), Abby Finkenauer (D-IA), Pete Aguilar (D-CA), Eric Swalwell (D-CA), Zoe Lofgren (D-CA), and Ted Lieu (D-CA) for co-sponsoring bills that were rolled into the recently-passed Deborah Sampson Act (DSA) (H.R. 3224). Thank you also to Sen. Jacky Rosen (D-NV) for cosponsoring DSA in the Senate (S. 514). Your continued attention to these bills is an important signal to women veterans that they have your support!

A thank you also goes out to Rep. Martha McSally (R-AZ) for supporting the Burn Pits Accountability Act (H.R. 663/S.191)

We appreciate all our cosponsors and their commitment to serving our nation’s veterans.