IAVA’s Policy Team had another productive and busy week on Capitol Hill. Throughout the week we attended meetings with congressional offices, represented IAVA at the new Veterans Education Caucus, gave an interview regarding the G.I. Bill, and we picked up four new cosponsors for IAVA priority legislation!

Tuesday, Director of Government Affairs Travis Horr was interviewed by Newsy regarding the G.I. Bill and how it may be impacted by the Democratic Presidential Candidates’ education plans. In the interview Travis was asked about his own experience with the G.I. Bill and its use as a recruiting tool, “I know there’s a lot of people that join and especially enlist because they don’t [have] the opportunity to go to college.” You can read the full article here. IAVA will continue to #DefendTheGI Bill and will continue to do so.

Later that Tuesday, Policy Intern Clark Bowden attended the launch of the new Congressional Veterans Education Caucus. Here, Representatives Susie Lee (D-NV) and Denver Riggleman (R-VA) began the event with opening statements and outlined the general mission of the caucus. “Our student veterans have the work ethic, drive, and desire to get the best education possible. We just need to make sure they are getting every opportunity to succeed. That is exactly what the Veterans Education Caucus is about,” said Rep. Lee. Following their statements, there was a panel of current student veterans, and President of Student Veterans of America, Jared Lyon, moderated by Military Times Reporter Leo Shane. You can read more about the event and the mission and initiatives of the Veterans Education Caucus here. 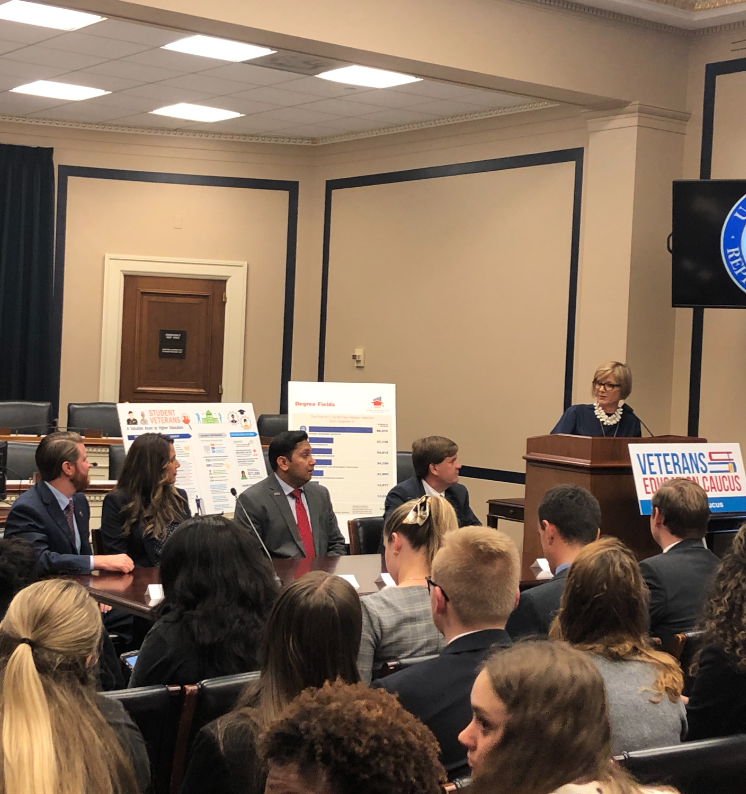 Rep. Susie Lee addresses the crowd at the launch of the Veterans Education Caucus. The discussion panel sits to her right.

Throughout the week our policy team met with members of congress and their staffs to discuss IAVA’s Big Six Priorities. These meetings discussed IAVA’s #CannabisForVets and Combating Suicide, and IAVA’s priority legislation, the #BurnPits Accountability Act (S. 191/H.R. 663). The Burn Pits Accountability Act was included in both the House and Senate National Defense Authorization Acts (NDAA), and we are continuing to fight for it’s inclusion in the final bill and sent to the President’s desk to become law.

IAVA’s Policy Team had a successful week on Capitol Hill, adding several new cosponsors for our priority legislation! The Burn Pits Accountability Act (S. 191/H.R. 663) gained a new cosponsor in Rep. Hakeem Jeffries (D-NY). We thank him for his support.

Finally, the Deborah Sampson Act (S. 514) picked up one new cosponsor. We extend our gratitude to Sen. Amy Klobachar (D-MN). The Deborah Sampson Act is just one of the ways IAVA is advancing our campaign to recognize and improve services for women veterans. You can find out what else IAVA is doing in this campaign here.