The DC team is coming off another impactful week and we have continued to build momentum across our #Big6 priorities. We attended a number of hearings that addressed suicide, #CannabisForVets, and #DefendTheGIBill. Melissa and Tom were at a roundtable hosted by Speaker Pelosi. And Melissa also met with Air Force officials this week concerning updates on a number of policies. Lastly, we added 7 new cosponsors on IAVA-backed legislation.

Tuesday this week Chief Policy Officer Melissa Bryant attended a roundtable hosted by the Secretary of the Air Force, Heather Wilson. This was a great meeting that covered many policies concerning our nation’s Airmen and women. Be sure to check out Melissa’s recap here and stay tuned to @IAVA for updates.

On Wednesday, Melissa Bryant and Legislative Director Tom Porter attended a Capitol Hill round table discussion on veterans healthcare with many of our VSO colleagues and Members of Congress, hosted by Speaker Nancy Pelosi and House VA Committee (HVAC) Chairman Mark Takano. The forum enabled extensive give and take of ideas that’s hard to do in a formal committee hearing. Melissa was able to highlight our priority legislation, including the Burn Pits Accountability Act, Deborah Sampson Act, VA Medicinal Cannabis Research Act, and others.

Wednesday also saw a full Committee Markup in the HVAC, which resulted in the passage of 18 bills, including many IAVA priorities, like legislation to combat suicide among troops and veterans. Some were bills that IAVA’s Steph Mullen testified in support of at last week’s HVAC hearing. Read IAVA’s full statement here, and follow this page to find all of IAVA’s supported legislation. However, the Committee did pull three cannabis-related bills from the full markup in order to socialize them more with other House Members. Read CEO Jeremy Butler’s reaction and the full story on that here.

There was also another important hearing on Wednesday by the House Committee on Oversight and Government Reform on the important topic of military and veteran suicide. This followed last week’s full HVAC and Health Subcommittee hearing on the same topic. IAVA is happy to see this important issue being looked at through multiple committees in order to reach solutions.

Also Wednesday, Tom and Steph visited the National World War II Memorial to share in recognition of the 74th anniversary of Victory in Europe Day. Tom had the honor of meeting Gil Howland and Bob Passanisi, two of only 14 remaining from the once 3,000-strong “Merrill’s Marauders,” who were U.S. Army jungle fighters that volunteered for a dangerous secret WWII mission in Burma fighting against Japanese troops. Read about their quest to recognize their unit with a Congressional Gold Medal here. 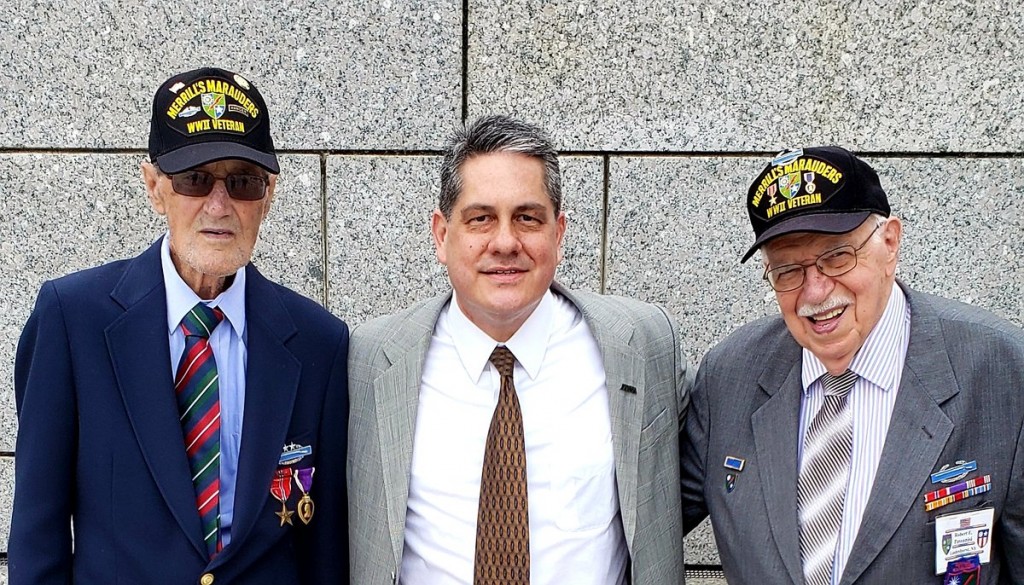 Thursday brought another HVAC hearing, this time on the IT issues that plagued the rollout of the Harry W. Colmery Veterans Educational Assistance Act (also known as the “Forever GI Bill”) During the hearing, VA officials assured Congress that the Colmery Act will be rolled out in full this Fall Semester following a series of IT debacles at the end of last year. This is an important issue in IAVA’s #DefendTheGIBill campaign and we will continue to monitor the VA’s progress. Check out Legislative Associate Travis Horr’s Statement for the Record submitted last Fall on this issue here.

On Friday, Travis was on the Hill for the monthly Cannabis Working Group meeting. This monthly meeting is a forum to hear about any new #CannabisForVets legislation that might be coming soon, and get updates on already introduced legislation. While we didn’t learn anything new as to why the 3 #CannabisForVets bills were pulled from a vote earlier this week, we’ll keep pushing to ensure equal access and protection for all veterans who wish to utilize medicinal cannabis. It was a great meeting and be sure to stay tuned for some exciting news in the coming weeks!