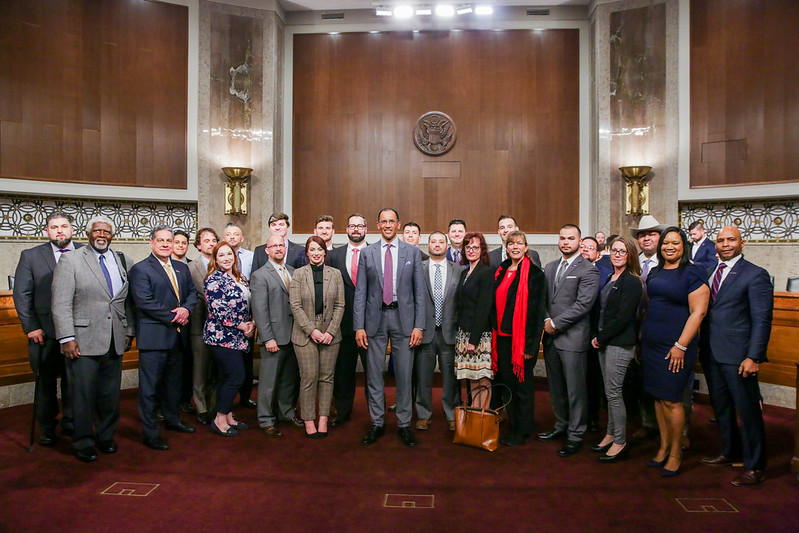 And what a night it’s already been. Big thanks to our friend Willie Geist for hosting the FacebookLive broadcast from our cammo carpet! I hope you got a chance to check that out. And did you see the service dogs in training? Yes, we’ve got puppies! Everybody loves puppies. IAVA is again bringing people together. With Willie Geist, puppies, Dr Henry Kissinger, Clay Aiken, Meghan McCain, Stephen Colbert, General David Petraeus! What other cause can have Dr Henry Kissinger and Clay Aiken in the same room?? Thank you to all if you for being here tonight! We’ve got a huge night ahead.

Our country needs you this week. Now, like never before. Troops continue to sacrifice around the globe. In an increasing number of countries. Optempo is increasing. Global threats are increasing. And back at home, our nation’s veterans are being used as political props. While many of the most pressing issue facing Veterans (and all Americans) are being ignored.

Tonight ​will be about changing that. Tonight will be about leading the charge to stop politicizing Veterans—and to start listening to them. At IAVA, we’ve always been committed to connecting, empowering and uniting veterans. Now, we’re encouraging all Americans, especially leaders in Washington, to do the same. We need unity. And that’s why this Veterans Month, we’re empowering veterans to unite all Americans. America is looking to its nation’s veterans to be a guidepost. And as always, our nation’s veterans are answering the call.

And many answered the call here in New York— just over a week ago. When a terrorist viciously, savagely rammed a truck into dozens of innocent civilians, here in our city. They were our neighbors, our friends, our guests from overseas. So as we begin tonight, I ask that we all take a moment of silence, to recognize the people who died and were wounded, after the worst terrorist attack we’ve had here since 9/11.

That truck stopped just blocks from where my wife Lauren and I walk our little son to school. And just a few feet from Ground Zero. Attacks like that may be our new normal. They’re something we can never get used to. But they’re something we’re likely to see more of. That’s daunting. And it’s scary.

But know this, when attacks do happen, our military and first responders will be there first, longest and always. When the chaos comes storming, it’s Veterans who step forward to meet it. Veterans are the cops, the fire fighters, the EMTs, the National Guard troops, the trauma surgeons. They are IAVA vets—and they are the helpers.

And at this time, I’d ask all the Veterans in the room, to please stand if you are able, or raise your hand, to be recognized.

This is your front line, America. These are the people who step up, when the chips are down.

They’re also the new kindergarten teachers, the new small business owners, the new inventors, and the new diplomats. They are here in this room tonight. And many more are outside on the streets keeping us safe. They are who we serve. They are who we are. And tonight, they are why you’re all here. Because you believe veterans are not a charity, they’re an investment. And they’re an investment we all need right now—more than ever.

As we remain in Iraq and Afghanistan…and 31 other countries worldwide. As we fight terrorists in new places like Niger. As hurricanes blast our shores. As a sniper opens fire on a crowd in Las Vegas.

When the shooting started in Vegas, IAVA member Charleston Hartfield ran forward to help others. Charles was a 34-year old National Guard veteran, an off duty police officer, and a youth football coach. And he gave his life, just as he lived—helping others.

Time and time again. When the chips are down, Veterans step up. And they hold the line. So politicians can debate, so football players can protest, so businesses can grow, Veterans quietly remain the Kevlar vest of our society. And the True North for our democracy.

If America were a religion, Veterans would be our clergy. They know what it’s really all about. And they can also challenge those who would weaken us from within. Whether it’s nazis in Virginia, or opportunistic politicians in Washington, Veterans will guard the soul of America. And when others seek to divide us, Veterans will unite us.

Here in this room tonight, and here​​ in New York City at the largest Veterans Day parade in America on Saturday. And in dozens of other cities and towns nationwide. And in the media and online. Veterans will unite us all. On Veterans Day–and long into the future.

And our nation’s veterans, couldn’t do it without each and everyone of you in this room. Many of you have supported our work for over a decade. It’s hard​,​ often thankless work, and you’ve always ​​had our back. You are our angel investors.

We want to thank our incredible​​ Board of Directors, and our tireless Chairman, Scott Feldmayer. And I especially want to thank our amazing​​ staff. They are true ​​heroes who work every day to make this country a better place.

Together, when IAVA members get home, we unite all Americans to educate, advocate and activate for—and with—veterans.​ Across party lines, in the face of challenge, producing hope. At a time when hope is pretty hard to come by. And that’s what IAVA is: an ass-kicking, get-shit done, hope-producing machine.​

Every generation of veterans needs a fearless, truth-talking, relentless voice to carry the flag and lead the fight. IAVA is​​ that voice for this generation.

From our founding in 2004, IAVA has led the way. Often when others wouldn’t. Many groups support​​ veterans. But IAVA reshapes the landscape, and changes​​ history.​

The biggest fights. The hardest fights. Like fighting for equality for women veterans. Women are the fastest growing segment of the veteran population. Women are on the front lines. They’re Army Rangers, they’re Marine Corps officers, they’re fighter pilots. But they are not getting the recognition and services they deserve. Only 27% of IAVA women veterans feel the public respects their service. The rate of suicide for women vets is 300% higher than for civilians. And military sexual assault and harassment is still appallingly too common in the military.

The IAVA network is fighting to change that. And to ensure that every veteran gets the respect and services they’re entitled to. It’s not an easy fight. But at a moment when America is confronting its failures for women nationwide, it could not be more important.

That’s what the IAVA model does. Powerful advocacy, massive awareness and innovative member-support programs, working in concert to drive change, while establishing a safety net to take care of our own along the way. Leaving no woman, or man, behind.

That includes vets with dishonorable discharges. They can’t go to the VA. But they can come to us. Someone needs to try to help them. Because if no one does, the consequences for everyone else can be devastating.

And no​​ organization will been more ​​important, ​more ​​fair, ​more​​ consistent in ensuring those who fight, those who die, and those who remain, are not forgotten.

IAVA has never backed down from a big fight, and we will continue to advocate, educate and activate veterans and allies nationwide to achieve real progress — and to bring Americans together.

Ever since 2004, IAVA has made the case: we’re not a charity. We’re an investment. And the investment you’ve made is blossoming in the rising leaders all around you tonight​. ​

Thanks to your support, the men and women in this room are poised to lead America for decades ​​into the future. They are America’s next​​ Greatest Generation.​

America has its founding fathers…and it has its guardians. The veterans in this rooms are guardians of our democracy. They put the greater good ahead of themselves. They call bullshit. They put country first. ALWAYS​.​

They’re why, every year, this is always an important and inspiring event. And tonight will be no exception. It’s a celebration of what makes this country great. So sit back, have a glass of wine, open up your hearts, fire up your twitter accounts (and your checkbooks!). And prepare to be inspired. And to be a part of something big.

Big things are still possible in America. That’s what every one of our honorees will show you tonight. And that starts with my friend, my mentor, and a truly great American, Rosanne Haggerty.

Watch the full opening remarks below